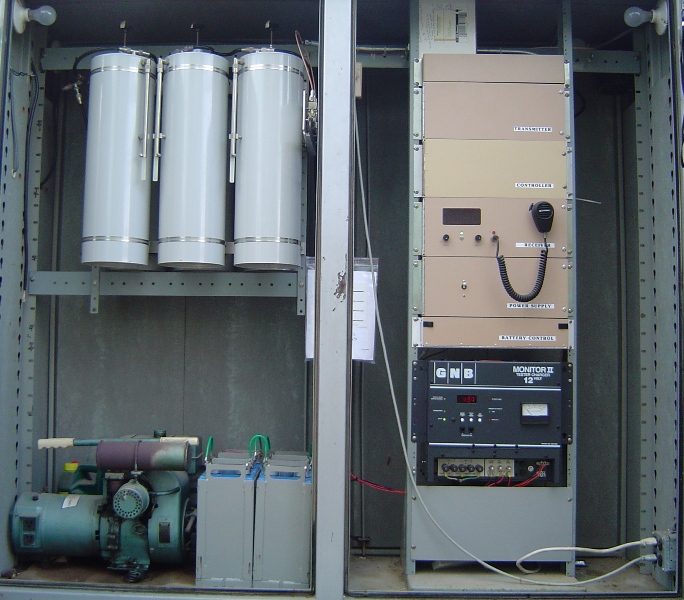 The W4RRC Repeater is located in the Heart of Batesburg-Leesville on the Town Municipal water tank located at Hendrix Street and Highway #1 (East Columbia Ave.) The base of the antenna is at a height of approximately 125 feet connected to the duplexer via 7/8 Hardline. Transmitter output power of 60 watts provides coverage into Columbia, Aiken, Prosperity, Orangeburg and Edgefield. The W4RRC Repeater is an open repeater but operates with a PL tone of 123 Hz to avoid interference. The PL tone may be deactivated simply by sending 123 on your DTMF keypad should you not have PL tone encode capabilities.

Reaching out into the surrounding Midland counties of South Carolina is the W4RRC Repeater System located atop the Batesburg-Leesville Municipal Water Tower. Born of the idea by Bill Robison [W4GIV][SK] and Rodger Williamson [N4NRW] that the twin cities of Batesburg-Leesville, South Carolina were in need of a private, non-profit, sophisticated and reliable form of communication to serve and protect the municipality and its surrounding areas in event of an emergency.

During construction, assembly, tuning, and testing, the Repeater went online first under the call sign of Bill Robison as [W4GIV][SK]. Later, having been installed at the municipal site, Dr. Alan Brewer was appointed Trustee and the machine call was changed to [N4HL]. Shortly thereafter, the RARC Club License was approved by the FCC and the Repeater was aligned with the new license under [KF4CMD]. It was during this time that the Vanity Call System was opened by the Federal Communications Commission and with research conducted by club member, Wayne Carroll [W4MPY], he applied for the Vanity call sign of [W4RRC] on behalf of the RARC under which the system now operates.

W4RRC would not have been a reality if it had not been for the gracious assistance of the Batesburg-Leesville community in its donations and skills. We would like to thank Union Switch and Signal, Columbia Farms, Avtec Corporation, J.B. Martin, Inc., B-L Seniors Club, Rileys Communications, Inc., Bobs ACE Hardware, B-L Concrete Finishing, Shealy's Bar B Que, and a special thanks to the Batesburg-Leesville Town Officials for allowing the installation on the town water tank.

Many thanks also to those individuals who were instrumental in breathing life into the RARC Repeater system and strive to keep it in top working condition. Recognition goes to former Repeater Trustee, club founder, and President Emeritus, Mr. Bill Robison [W4GIV] [SK] and his wife, Norma [KF4JDF], to present Repeater Trustee, Rodger Williamson [N4NRW], to Control Operator, C.W. Gantt [W4CWG][SK], Bob Penick [KE4BNJ], Bill Smyth [WA4ZZQ], Jim Rotan [KD4OK], Wayne Carroll [W4MPY], Dr. Alan Brewer [N4HL], and to all then members of the RARC who made this project happen!